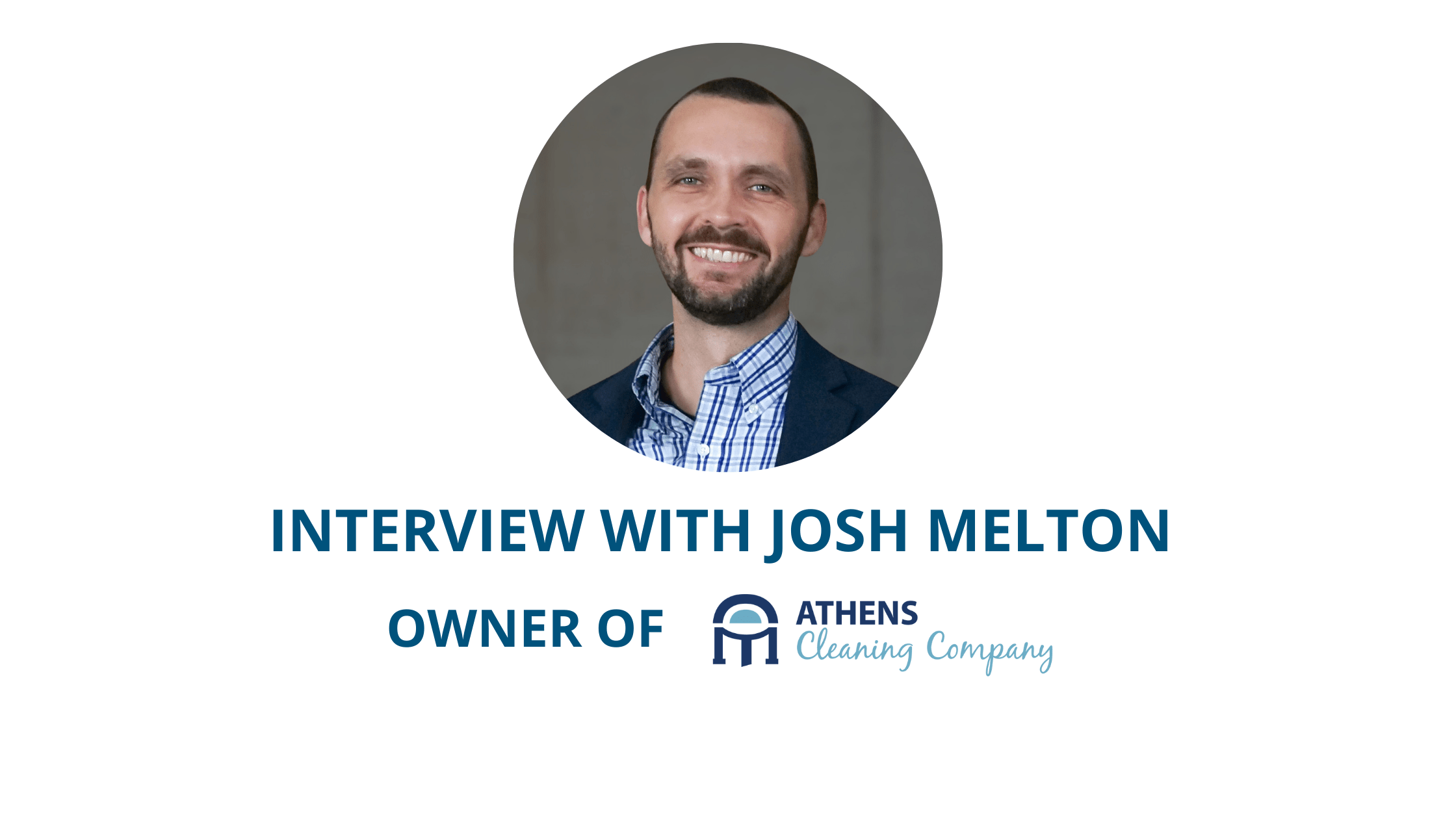 We recently sat down with Josh Melton, owner of Athens Cleaning Company from Athens, Georgia.

Our conversation gets into the heart of how Josh has led his business to weather the pandemic, the hardest parts of being an entrepreneur, how Josh manages to keep turnover low, and how technology has helped him grow to over a million dollars in annual revenue.

Swept: Tell me about yourself and your business.

Josh Melton: I’m Josh Melton. I’m one of the owners of Athens Cleaning Company. My wife actually started the company—she got me into it. In 2012 I partnered with another cleaning company. We were probably doing $100K of revenue when we combined. We’re at about 1 million in revenue now. So we’ve been able to scale up every year and grow.  We’re one of the top—if not the top company—that does what we do.

Swept: It’s pretty incredible that you found a partner and it all worked out. It can be a huge risk to do that.

Josh: It was a huge risk. We were super naive, we were somewhat young. We were both 31, I think.

Swept: How long were you both doing hands-on cleaning?

Josh: That’s a great question. We started in 2005, my wife and I. So we were cleaning probably until 2012, pretty heavily. We had employees but I was definitely still in the field. We had a manager in place from 2013 ‘til 2018. There was a short season at that time, so I kind of jumped back in and built some systems and leveled us up, but I operated as a full-time operating partner.

Swept: It sounds like you guys have grown a lot. Obviously growth is a goal, but has it become more of one, or was it kind of ‘surviving’ at some point? How did you switch your mindsets throughout different stages of the business?

Josh: When it was just me, I was at a point where I wasn’t trying to grow because I was adding a headache every time I tried. I had not found key managers that I could truly rely on. I had another business too, so I wasn’t trying to grow. I was just trying to hold it together. When we merged businesses and took on a partner, that’s when I was like, “All right, we want to grow.”

We got to a two-part focus.

Swept: The scale of the growth sounds incredible but definitely challenging. What would you say are the hardest things you’re facing now with this kind of escalated growth?

You can teach your people what to do, but it’s difficult to teach them how to think. I’ve been doing this for 15 years. How can I bring somebody on and download as much of that thought process as fast as I can?

Swept: I love that. That is one of the hardest things to impart upon people you’re trying to teach and grow. It’s really about how to think about a problem, not just what are you doing about the problem.

Josh: I don’t want to be the problem solver—I want to know how you think. So you could say, “I recognize there’s an issue, here’s what the issue is, here’s what my solution is.” Do that and we can win on a consistent basis.

Swept: Here’s another question, What’s the toughest part of being an entrepreneur?

Josh: It’s very, very lonely. Most people are not entrepreneurs. And so most people who become entrepreneurs are not understood by their friends. You’re going to be isolated. So you’ve got to know why you’re doing it. You gotta be tapped in emotionally, so strongly, to what it is that you’re chasing, that you can get through the loneliness. When you’re the entrepreneur, you own your job, you can’t walk away from it. You know what I’m saying?

Swept: Yes. It’s a tough thing to do. You have to be so confident, and you have to stay confident while you’re making a lot of tough decisions.

Swept: The next question for you is about the pandemic because it’s hard not to talk about it. Obviously, you’re seeing a lot of growth, so that’s really positive. But what’s been the biggest challenge? What have you been facing throughout this time?

Josh: I think the biggest challenge has been the ridiculous unknown of it. It’s not like, “Hey, this is football season. And it ends in February.” It’s like, “This is forever season. We don’t know what the heck’s going on.”

But we have seen significant growth. We were fortunate enough that, from a niche perspective, the overwhelming majority of our clients are considered essential—we clean a ton of banks. I didn’t pick the niche that we picked because I thought a global pandemic would happen one day and we would be secure. We just got lucky. Somebody else would have a totally different answer because their business fell apart because they were cleaning restaurants or something.

Swept: How did you find your niche?

Josh: Trial and error! We just did a little bit of everything: the company started as a house cleaning company. Then we were doing post-construction cleaning. My first commercial account was a big fitness center and we just eventually were like, we like commercial cleaning. We dropped the residential side. As we’ve grown, we’ve been like, just get narrow and narrow and narrow.

Banks are our number one. We like cleaning banks because most of the time they’re cleaned multiple times a week. Nobody’s cooking dinner there. Nobody’s taking a shower there. They’re just not very dirty.

We also have a niche team member. I’m looking for somebody that has a professional job and I want them to work three days a week, with little, 2-hour shifts. I’m looking for introverts more than extroverts. This is a side gig for most of my members. They’re making $400-$500 a month. I’m not hiring full-time cleaners that burn out on their jobs.

It’s funny, as some cleaning companies get larger they start taking on larger and larger buildings because there’s fear of competition… I’m like, “Nope! I’m going to focus on a place that one person can go in and get clean in three hours or less,” because otherwise, my model falls apart.

Swept: I do want to go back to something you said—hiring and training is tough in our industry. And you mentioned you look for introverts. Can you tell me a little bit more about your hiring process, and why and how you implemented it?

So we have to be pretty suave. Instead of posting job ads, we posted it as a “side gig” on LinkedIn. We send a 40 question personality test to see how the people are wired. If the person is an extroverted people-person, they’re probably not gonna want to clean all by themselves for two hours and not talk to anybody.

I’m also looking at where they work. What’s their work address, what’s their home address and what do I have that’s within the vicinity of that? I may not have something for them. If they’re driving an hour to make 30 bucks, it’s not gonna be a fit.

Swept: Our founder, Michael Brown, has talked a lot about this [when he owned his cleaning company]: he always tried to figure out where people were [living], because if they were going to have to go too far, maybe that wasn’t the right choice for them.

Josh: One of the challenges we face is they haven’t thought about that yet. All they’re thinking is, “Yeah, I need to make an extra $400 a month.” So they’ll take a job that’s not a good fit for them.

Swept: Well, I don’t want to keep you too much longer. I have two more questions and then we can wrap it up. What kind of tech have you used and how does it help you run your business?

Josh: We use a lot of different things. My leadership team, we talk a lot through text messaging, group text messages. We’ve used Google Voice and Grasshopper  too. We have 110 locations that we’re responsible for, so we have a ton of keys. We use Asset Tiger to keep track of our keys.

And then Swept  is the primary one we use. It was a game-changer for us because I had all these people out there, but I don’t know if they showed up. That was our number one reason for starting with Swept—I needed to know if cleaners were [onsite] or not.

I’m sure there are other things we use. But for the most part, we’re using Google Workspace, Grasshopper, Asset Tiger, and Swept.

Swept: Great! My last question for you: if you could offer one piece of advice to someone looking to start their own cleaning company, what would it be?

Josh: When I got started, there was a chat group called the global cleaning association. I’d be in there all the time asking questions or just reading threads, you know, trying to find out information. But one of the challenges I see in today’s world are Facebook groups, where I see most people go to try to find information.

And what I see often is people ask questions to a mass of people that aren’t qualified to answer. And so I think that the number one thing I would say: find someone who has the results that you want and ask them for knowledge. Find people that have verifiable knowledge.

Don’t ask a bunch of—this is going to sound crass —don’t ask a bunch of idiots for wisdom! But I see that so often it’s just a blanket approach of like, “Hey, here’s the cleaning company group. There are 7,000 people in it. Let me ask this.”

I saw one specifically play out. Somebody asked a question and this person answered it. And I’m like, that person has zero clients. Zero clients! They just got started, but I saw them giving advice.

Finally, stay true to what you are. This is what you want, get emotional about it. You may find that the cleaning business is perfect for you, or you may find it’s not and you may want to pivot. That’s not a big deal. You’re not a quitter.

Swept: Wow, that’s great advice, Josh. Thank you so much for spending the time to chat with me today.